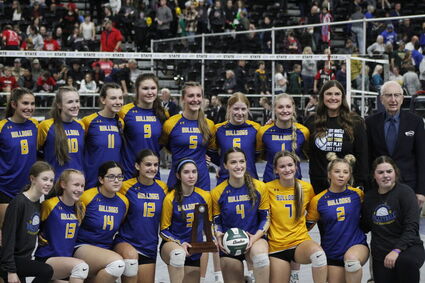 The Colfax volleyball team poses with its second-place trophy at the WIAA 2B State Volleyball Tournament Nov. 11 at the Yakima Valley SunDome in Yakima.

YAKIMA - After beating No. 1-seed Kalama earlier in the day, Colfax had one more match on the schedule against No. 3-seed La Conner for all the marbles.

It was a special season for Colfax – who made it to its first championship game appearance since 2017 and had not lost a game outside of tournament play to a team in the 2B classification.

"I think the biggest thing is just how far we've come this year," Colfax coach Megan Dorman said. "We have improved times ten. So – to see them play in that match – that big (of a) game – and not give up; I thought we played until the end. I think...