Bulldogs clinch No. 1 seed in State Tournament with District win over Liberty 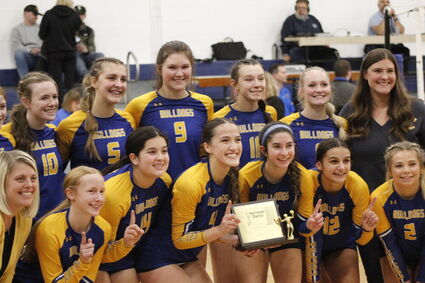 The Colfax Bulldog players and coaches pose with their District Championship plaque after defeating the Liberty Lancers 3-0 in a Washington 2B District 7 Championship game Nov. 3 in Colfax.

COLFAX – Colfax secured a state playoff berth with its win over Upper Columbia Academy on Nov. 2 and a spot in the District 7 championship game against Liberty (Spangle).

Colfax wasted no time getting out to an early lead – going up 10-3 in the early stages of the game on the Lancers. The Bulldogs continued to expand on their lead – going up 19-9 before finishing with a 6-3 run to take the first set 25-12.