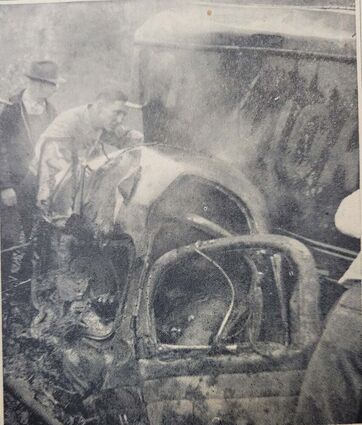 The Sun of Prosperity Has Kissed the Hills of Palouse

Its Genial Rays warm Every Home In a Land of Peace, Plenty and Good Prices.

The magnificent wheat crop of the Palouse coutnry is practically saved, and in prime condition. Everything south of the North Palouse river is in either the sack or warehouse; and but little remains to be threshed north of that stream until the vicinity of Oakesdale and Tekoa is reached. In the unfinished regions, where a scarcity of men and machinery prevailed during the earlier weeks of the harvest, there is now a plethora of both. With the prevailing bright weather the end of the bountiful harvest of grain is in sight, after weeks of toil and anxiety on the farms.

Following the several years of agricultural depression, the present harvest of grain, with attendant good price, is a windfall to the Palouse farmer which is highly prized. Old scores to the amount of hundreds of thousandss of dollars are being wiped out, improvements made, and the comforts of life placed within reach. Trade upon a cash basis has expanded even beyond the flood tide of the credit years, and the people both farm and town have out of the dumps as if touched by a magic wand.

ROAD MEETING TO BE HELD AT Colfax NEXT YEAR

The delegation road men from this city who attended the Yellowstone trail meeting at Kennewick last week, suceeded in securing the 1923 trail association meeting for this city.

There were nine delegates from Colfax, among them being George L. Cornelius, L. L. Bruning, J.D. Lewis, Clyde Cram, Fred Doolittle, R. E. Allen, J. Floyd Tifft, Ray Walter and Oliver Hall. The delegates made the trip to Kennewick overland and they were present to attend the Pasco-Kennewick bridge opening ceremonies on Saturday.

From the Colfax Gazette-Commoner, Friday October 31, 1947

This is what was left of the cab of the truck and semi-trailer that raced down the Canyon south branch of the Palouse river and buried its front wheels in the ground on the bank. Virtually all of the truck was shoved back under the trailer by the force of the impact. The dead driver, Arthur G. Isitt, 24, Walla Walla, is at the wheel his head and upper body showing through the window at the right and his closed fingers through the windshield at left. Peering into the front part of the trailer is Fireman Bob Baker. At noon Thursday the motor equipment was still in the river channel awaiting removal.

Jim Gentry, son of Mr. and Mrs. Lawrence (Red) Gentry of Colfax, sizes up a super pumpkin which will be part of the festivities when Halloween rolls around next Tuesday night. The pumpkin weighs 35 pounds, about 20 pounds less than Jim.

Challenged but not stopped were the Tekoa/Oakesdale Nighthawks who left Rosalia Saturday with the league and county tourney trophies. In front, from the left are Erin Wise, Christa Graffis, Michelle Dahl, and Shawna Hodges. In back are Andrea Hay, Heather Cox, Sara Driscoll, Sarah Rambo, Molly Smart, Amanda Smith, Samantha Marsch, and Tina Beddingfield.

A day at the orchard in Garfield was disruped Oct. 7 when an aggressive moose was shot and killed by a Washington State Fish and Wildlife enforcement officer.

Families and children were on site at Bishop's apple orchard when Colfax E.M.S. was called on account of an aggressive bull moose which was charging people.

Colfax E.M.S. contacted Bob Weaver, a Fish and Wildlife officer in Colfax, who arrived on scene along with Whitman County Sheriff deputies. 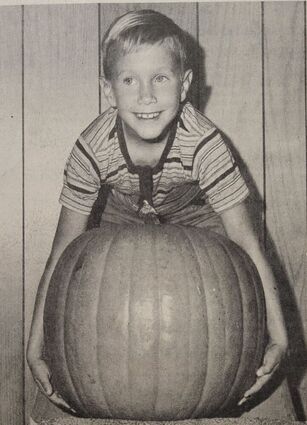 The deputies ordered the orchard evacuated and Weaver attempted to "haze" the moose, trying to herd it toward an exit gate at the back of the orchard. He hollered, waved his arms, screamed and threw apples at the adult bull moose, estimated to be in the four-to-five year old range.

The moose charged Weaver and he retreated. The moose kept charging and he shot it dead.

"This was a very aggressive, agitated bull," said Madonna Luers, Public Information Officer for Washington State Department of Fish and Wildlife. "Usually we're able to handle a situation without haveing to take the animal down but in this case, this was t he only way."

"This is probably the most aggresssive moose I've ever come across," said Weaver. "The difference with this one was that it continued to charge after I retreated."