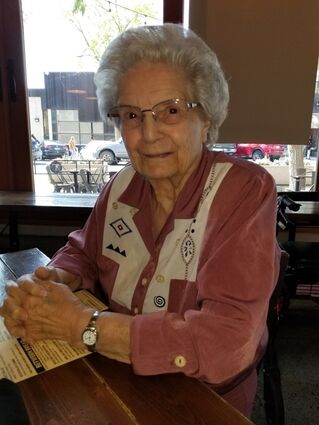 Leona Conrad, a lifelong Onecho area resident, passed away at her home on Friday, October 14, 2022, at The Courtyard in Colfax. She was 94.

A graveside service will be Thursday, October 20th, at 10 AM at the Onecho Cemetery followed by a Memorial Service at the Onecho Bible Church at 11 AM. Viewing will be at the Corbeill Funeral Home in Colfax on Wednesday from 9 AM to 5 PM.

Leona was born December 19, 1927, in Colfax to Albert and Evalina Schrag Schluneger and was raised on the Onecho farmstead with her siblings: Earl, Leslie, John, Elmer, Virginia and Edwin. She often rode her beloved horse "Prince" to the Onecho Schoolhouse for class each day. Leona attended high school in Colfax where she met her future husband, Joe Conrad. She graduated from there in 1946 and Joe went on to the U.S. Army where he served for three years.

Upon his return to Colfax they married on March 19, 1949, and made their home in the Onecho area and along Conrad Road south of Colfax where they raised their family. Leona loved to go camping with her family; she also did lots of canning and cooking, and spending time outdoors or on nature walks. Following Joe's untimely death in 1981 she moved into Colfax where she lived for the next 40 years.

Leona was a lifelong member of the Onecho Bible Church and was very active in the children's ministries at the church. She loved child evangelism fellowship and was instrumental in the Vacation Bible School, the day camps, and the Good News club. She loved her church family. Always a gracious host; Leona opened her home to many missionaries over the years. She was an avid reader and liked to work jigsaw puzzles.

She loved being a grandma to her seven grandchildren and now the great-grands. Trips to the Oregon Coast were favorites too. Her family was very important to her and she hosted or attended many family reunions over the years where she loved catching up with everyone.

She was preceded in death by her parents, her husband Joe, and by siblings Earl, Leslie "Heck", John, Elmer and Virginia.

The family suggests memorial gifts in her memory be to the Onecho Cemetery.

On-line guest book is at http://www.corbeillfuneralhomes.com

Corbeill Funeral Home in Colfax is caring for the family.