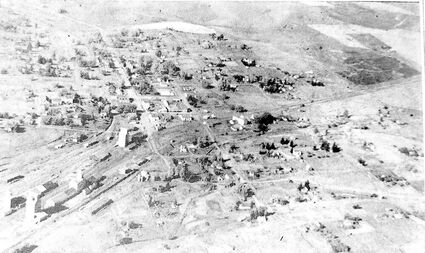 75 Years Ago From the Colfax Gazette-Commoner, Friday, August 22, 1947 Oakesdale was platted by James H. (Uncle) McCoy in 1887 and was named after a Northern Pacific railroad official named Oakes. The first business enterprise was a mercantile store opened in 1887 by Hinkle & McCoy (James H.) who had come with their families from the Willamette valley in Oregon. In the same year the National Bank of Oakesdale was founded by Samuel Brown and the Northern Pacific built what was to be its Spokane-Lewiston line through Oakesdale and on to Belmont which was the end of the line until a year later. Wheat was hauled to Oakesdale from miles around and it was nothing to see 50 wagons waiting in line to get to the elevator to unload, according to State Representative Fred Miller, an Oakesdale pioneer himself. John Martin, Colfax, helped build the first brick block in 1889 after a fire had destroyed most of the town.

Garfield- L. W. Follis has finished harvesting a piece of timothy that is hard to beat. From 19 acres he had 45% tons, or nearly two tons and a half to the acre, says the Enterprise.

Pullman- At a recent meeting of the school board a five mill tax was levied to raise a sufficient amount of money to pay current expenses, and pay one-half of the bonded indebtedness, the idea being to pay one-half this and the other half next year, says the Herald.

Palouse- The council held a special meeting last Friday at which...