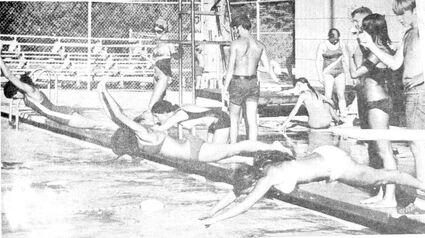 50 Years Ago Four girls fly toward the water Monday in the Colfax Tekoa meet at Colfax while timers keep an eye on the seconds. Lila Roosevelt, left, took all three individual events in this class, girls 18 and under. Other girls, left ti right, are Marie Meserve of Tekoa, Trudy McClintok and Susie Birr.

Will Open a New Store.

After an absence of two and a half years in San Francisco, Herman Kaminsky returned to Colfax last

Friday to engage in business. He will open the Red Front clothing store in the Burgunder building, so long occupied by C. B. Newman, and expects to be ready for business by August 20. Interrogated as to the why and wherefore of his move he said: "My faith in the Palouse country has never waned and my coming might be compared to the swallows that come in the spring. They have an end in view, and mine is to tak...