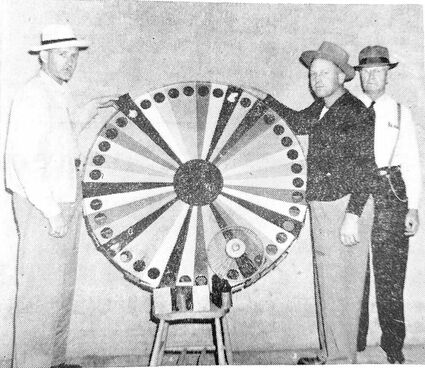 Whitman County has had a visitation from a modern Jack Cade during the past week, and late advices say Constable Oliver Sparks of Tekoa, and C.M. Lee of Seltice, were up on his trail in the Idaho mountains, with every prospect of bringing him back and checking his romantic career as a highwayman.

Wm. Hubert, a South Carolina youth, arrived in Oakesdale last week, and made his home at Mrs. Anderson's boarding house. He quickly ingratiated himself with his fellow boarders who felt a kindliness for the young man, and were eager to show it. Wednesday morning, however, the feeling changed, Hubert during the night having levanted with board bill unpaid. Departing to his company, were a fine rifle and revolver belonging to a fellow boarder, Roe Warren. That evening near seltice station, Mrs. C.M. Lee, who was driving home from Tekoa, was frightened almost to death, by the sudden command to throw up her hands. She threw 'em up and kept them there, until Hubert, for he was the highwayman, had taken a horse and saddle and ridden away to the east, across the Idaho line, onto the Indian reservation. As soon as possible Mr. Lee was notified, and securing a warrant and Constable Sparks started in pursuit.

Those who have been arrested on booze charges this week are playing hide and seek with the officers. When convicted in the justice courts, they immediately file an appeal bond and walk out of the court house. W. J. Webb was fined $200 and given a 30 days jail sentence the first of the week and within a short time after the trail in the justice court, he was loose and walking about the town. He filed an appeal bond and as no one who has filed an appeal bond is ever molested afterwards. it is supposed that Webb will be used as generously as the rest of those who have been released on appeal bonds. One Colfax man has been released on appeal bonds, the case never being carried to the superior court for trial.

Before Frank E. Clemens, Lewiston, had operated this unique gambling device very long a carnival in Endicott Friday night he had been arrested by Sheriff "Pete" Parnell and Deputies Lloyd Whitmore, left, and Melvin Nickerson, second from right. The game was to place one's money on a colored stripe and wait for the release of a white rat from a cage that coered the center circle. As the board, in a horizontal position, was spun, the cage was lifted and the rat dashed for a hole. If there was such a person as a winner he was the one who had bet on that particular hole. The rat dropped into a removalbe cup under the board. Two of the seven rats used in the game are shown peering from holes near the top of the board. They were displayed at the office of Justice Ralph McNeilly who fined Clemens $25 and allowed him to keep the other five rats. The tame little animals were said to show various color preferences known only to the operator, so were used in accordance with the way the bests were placed. Cups and cage are shown at the foot of the wheal. Ted Phillips, manager of the carnival to whome Clemens was paying one-third of his "take," was arrested but later released. Deputy Sheriff Mark Powers is at the right. –Gazette Commoner photo.

Gophers at the Whitman County Memorial Airport near Colfax apparently can't read the label on the underground cable furnishing power to light the field at night-the label says "rodent-proof" but the gophers ignore it and keep on eating the covering down to the bare wires.

County commissioners are investigating the cost of putting the cable in "genuine" rodent-proof conduit to end the lightless nights at the field.

A strongly- worded complaint about the lack of lights was received recently from a flyer who read in a national publication that the Whitman County airport had night landing lights-and discovered the hard way, at night, that the lights weren't in operation!

A tanker truck spilled a load of over 2,400 gallons of gasoline on Highway 23 south of Lamont last Friday when its trailer unit rolled into a roadside ditch.

Driver Frank W. Peters, 45, Spokane, was unhurt in the accident.

According to the state patrol report Peters was driving south at 3 p.m. Friday and lost control of the truck on a sharp curve about one-half miles south of Lamont. The truck went off the roadway and the tanker rolled on its side, ruptured and spilled its contents.

The cab portion of the 1986 Kenworth remained upright.

State crews were called out to flag at the accident scene and were back at the site Saturday when a contracted crew from Olympus Environment Inc. Checked on the spill. Olympus representatives were unavailable for comment this week. 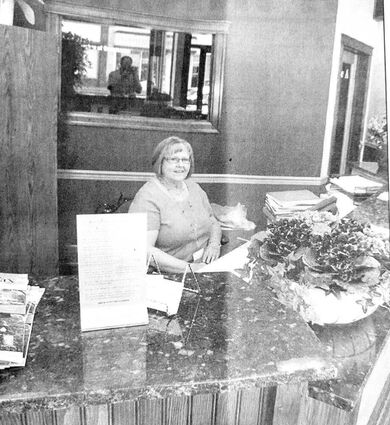 From the Whitman County Gazette,

Colfax Chamber of Commerce secretary Kathy Clark sits behind her desk in the agency's new office at 120 S. Main Street. The Chamber moved to Main Street early last month from its former office on Wall Street which was part of the PNW Farmers Cooperative building which is being remodeled as the grain company expands. Clark said the Main Street location has thus far led to a greater number of visits from passing motorists looking for information abot the area