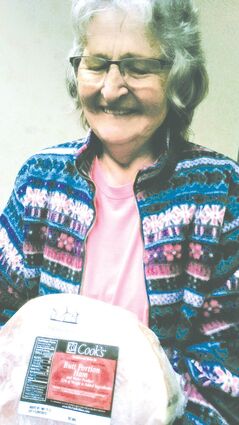 Dee Stadden | Special to the Gazette

Diana Bridge, 75, holds a ham donated to the Oakesdale Food Pantry by Palouse Winds in April.

OAKESDALE – The Oakesdale Food Pantry is in search of a new home after receiving an eviction notice Friday, July 15.

The community pantry was given one month to move out after almost seven years at 103 Steptoe Ave.

The pantry, which is supported by The Council on Aging & Human Services, has distributed food and supplies to Oakesdale residents for the past 22 years.

According to pantry Director Dee Stadden, the pantry provides necessities to more than 40 area residents on a monthly basis.

The building's owner, Raymond Oneal of Lapwai, Idaho, reportedly has other plans for the property...