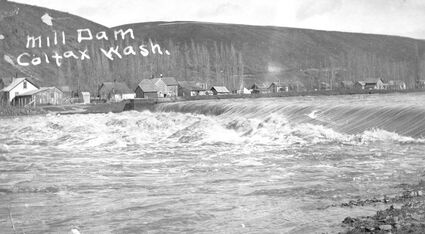 A historic photograph shows the mill dam, built in 1871, on the fork of the Palouse River to the north of East First and off of Main streets.

Editor's NOTE: This is the first in a six-part series on the history of Colfax leading up to a July 23-24 celebration.

COLFAX - On July 10, 1870, James Perkins and Thomas Smith claimed land at the junction of the north and south sections of the Palouse River.

The site would later be known as Colfax. (On July 23-24, the city will celebrate a century-and-a-half of history.)

At the time they settled here, the land was inhabited by bands of Palouse and other Sahaptin-speaking people, which included the Nez Perce Tribe.

The Nez Perce Trail was on a small part of southeastern Whitman County,...