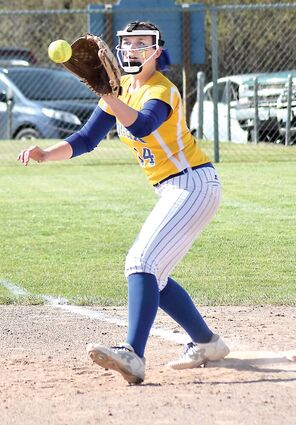 Delaney Imler catches a throw to put a Northwest Christian runner out at first in the first day of 2B District 7 play Friday, May 20, in Spokane.

YAKIMA - Despite a loss to league rival Liberty (Spangle) in the district championship, the Colfax Bulldogs girls fastpitch softball team is taking a No. 5 ranking into the state 2B tournament.

Colfax opens state play at Gateway Park at 10 a.m. Friday, May 27, on Field 3. The Bulldogs will face 12th-ranked Goldendale.

Meanwhile, the rival Lancers will be taking Field 2 as the No. 7 seed. They will open with No. 10-ranked Rainier .

The state berths follow the Lancers' 6-5 upset of the Bulldogs in the District 7 championship on Saturday, May 21.