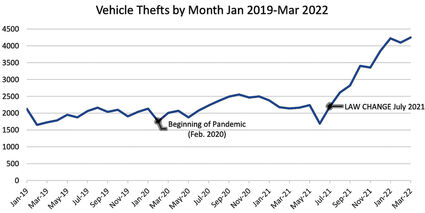 A graph shows a dramatic increase in the number of vehicle thefts statewide since House Bill 1054 went into effect last year on July 25.

COLFAX - A law limiting police chases to cases only involving a potential violent offender has led to an 88% increase in vehicle thefts.

With the number of vehicle thefts skyrocketing statewide, Whitman County Sheriff Brett Myers is calling on lawmakers to rescind the law that only went into effect July 25 last year..

Under the law, officers can only engage in a pursuit with probable cause to arrest a person in the vehicle for committing a violent crime.