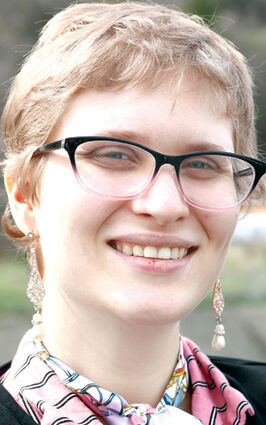 Chelsea Smoke of Tekoa has joined the Whitman County Gazette as the advertising and marketing specialist.

COLFAX - A Tekoa resident has been hired as the new sales and marketing specialist serving local businesses at The Whitman County Gazette.

Chelsea Smoke, 26, of Tekoa, began her first day Monday, April 11. She replaces Sarah Stephens, who accepted a job in Spokane.

Smoke will be assisting businesses in Colfax and greater Whitman County with their advertising and marketing needs.

The new career is a good fit for Smoke, who says she enjoys working with people.

"I am really looking forward to meeting people," she said. "The people in Colfax have already been so kind and welcoming."

"Chelsea will be a great addition to our Colfax team," Publisher/Co-owner Roger Harnack said. "The fact Chelsea is a county resident is a bonus."

Smoke grew up in Milford, Dela.

She moved to Germany with her husband, Curtis Smoke, who was serving in the U.S. Air Force.

retired from active duty three years ago, and the couple began looking for a home.

They purchased a house in Tekoa two years ago and became Whitman County residents.

The couple has two dogs, Ajax and Nani, and like the quiet and peaceful town of Tekoa, Chelsea Smoke said

Chelsea has been a fan of the print media world and was in awe when first touring Free Press Publishing's printing press in Cheney.

"I like to see the big printing presses. The printing press was so cool to see," she said, noting it sold her on the job in Colfax.

"The paper in Colfax is really old, which is also really interesting to me."

The Gazette is the oldest continuously published newspaper in the state, having printed its first edition in 1877, when the county was still part of the Washington Territory.

In her free time, Chelsea enjoys exploring her artistic side.

"I paint a lot and make new outfits out of re-purposed clothing I find at thrift stores," she said.

"I really enjoy pottery, too," she noted.

Olivia Harnack is the Editorial Intern and Journalist at the Whitman County Gazette. Olivia is enrolled at College for Creative Studies (Detroit, Mi.,) and is majoring in digital film studies. Olivia has previously worked with companies and organizations like TEDX, Keller Williams, and several directorial film agencies where she assisted on film sets. Olivia is in the process of enlisting in the Army National Guard and is eager to serve Whitman County.