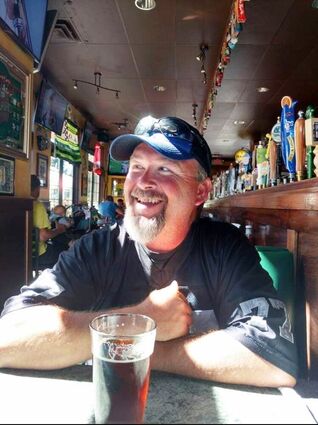 On March 28, 2022, the world lost one of its best. Shane Michael Davidson's warm smile was like a "welcome home" to everyone. A legend in construction and carpentry; no one knew more about concrete than him.

His vast knowledge of everything construction will be sorely missed, as will his plethora of random facts, quotes, movie lines, quick wit and humor.

Shane passed peacefully at Whitman Health and Rehab, in Colfax after a short battle with cancer. He was surrounded by friends and family, while listening to his favorite classic rock tunes.

Shane was born Jan. 13, 1975, in Portland, Ore., to Sherrie Zimmerman and Michael Holtman. Two brothers, Travis and Josh, followed close behind as the family lived in Coos Bay, Ore. Sherrie moved with the boys to Colfax, where she met and married Bruce Davidson.

He grew up in and around Colfax, riding dirt bikes with friends, and trying not to get caught for their mis-adventures. He attended Colfax High School, but left a year early to get his GED. He hated school, but was always a learner of life. He went to work immediately as a farm laborer and harvest truck driver.

In 1993, Shane met Crystal Flint in Moscow, Idaho, through mutual friends. It was love at first sight. He moved to Moscow and started working at U of I with her father, where they built a strong bond. Shane and Crystal lived in Moscow, eventually marrying July 13, 1996, becoming an instant Dad to her son, Samuel.

Shane often told Crystal, "I used all my luck up getting you."

Shane first took a construction job in 1994 and was hooked. He loved being a carpenter and learning everything from the trade masters. He was a sponge of construction knowledge and loved learning and then teaching others. He was often known to many of the guys as "Boss Man" or "El Jefe."

The family moved to Irrigon, Ore., in 1997, for Shane's work. Their son, Race, was born in 1999, in Hermiston, Ore, and had many special needs. The family moved to Colfax, WA in 2001, to get their son the medical services he needed, and be closer to family. Their daughter, Molly, was born in Colfax later that same year. Their family was complete.

The family also lived in Ellensburg, Wash., and Pullman, Wash., before settling in the friendly town of St. John, Wash., in 2014. Their granddaughter, Hazel, came to live with them in 2019. Shane was known as Papa, and he loved teaching Hazel how to build things. Shane was so proud of his kids.

Shane worked 27 years as a journeyman carpenter, and concrete finisher. He was a master finisher and worked on bridges, treatment plants, schools, hospitals, and more, throughout the northwest. He was injured in 2011, and attended WWCC, studying accounting.

He worked for a short time for Ace in Pullman, and was known for custom requests and his vast knowledge of tools. Shane could never get used to an indoor job though and returned to construction slowly, first as a building inspector and later as a warranty tech for Hayden Homes in Pullman.

He was often called upon to help solve complex construction problems. Shane never let a friend down when in need.

Shane's year-round "raccoon eye" tan denoted his love of the outdoors. He loved camping and fishing with his family and friends, hunting with Molly, and driving the backroads with Race. He was an avid car enthusiast, loving classic car shows, races, and always had a car project in the works. He remembered fondly a trip to Talladega.

Shane was a hardcore Oakland Raiders fan. He breathed black and silver. He also loved going to concerts with friends, some favorites were Iron Maiden, Guns 'n Roses and Judas Priest.

His final year battling cancer, he did it hand-in-hand with his devoted wife. They traveled, played Scrabble, and loved spending every second together. He fought valiantly everyday.

Shane was predeceased by his father, Michael Holtman, and his "pops/dad," Bruce Davidson.

Per Shane's request, a private memorial service will be at a later date. In lieu of flowers, please consider donating to the Shane Davidson memorial fund at P1FCU or to the Ronald McDonald House.