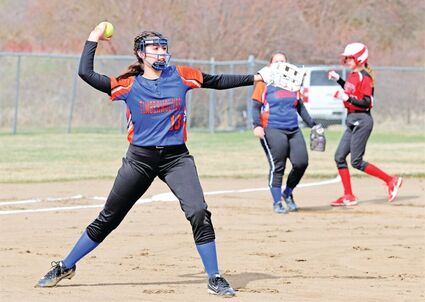 Timberwolf Emma McEldry fields an infield hit and throws to first base for an out against Liberty on Thursday, March 26.

TEKOA - The Tekoa-Rosalia Timberwolves girls fastpitch softball team is off to a slow start, dropping its first three games of the season.

The Timberwolves (0-3) lost to Liberty (Spangle) on Thursday, March 24, then fell twice to Sunnyside Christian in a doubleheader on Saturday, March 26.

The local girls game at Davenport on Tuesday, March 29, was canceled.

In the season-opener for both Liberty and Tekoa-Rosalia, the Lancers jumped out to a 5-0 lead by the top of the 3rd inning.

In the third, Liberty pitcher Jaidyn Stephens got the bats going for the Lancers with a homerun.