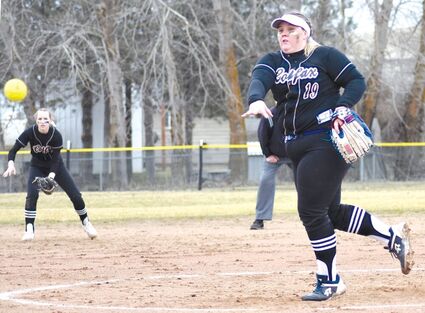 Senior Jorja Koerner pitches against the Lind-Ritzville Broncos in a doubleheader Saturday, March 19, in Ritzville.

RITZVILLE - The 2022 girls fastpitch season got underway Saturday, March 19, with the Colfax Bulldogs quickly establishing bats sweeping the Lind-Ritzville/Sprague Broncos in a doubleheader.

Harper Booth went 3-for-4 with a homerun and and three RBIs for the Bulldogs in Game 1.

Teammates Devan Becker and Taylor Parkins each added 4 RBIs in the victory.

In the nightcap, Booth remained tall at the plate, going 2-for-3 and adding another homerun with 2 RBIs.

While both teams play in the Northeast 2B league, the was a nonleague event.

The Colton Wildcat girls also took the field Saturday, traveling to Sunnyside Christian to face the Knights in a doubleheader in mid-50s temperatures. 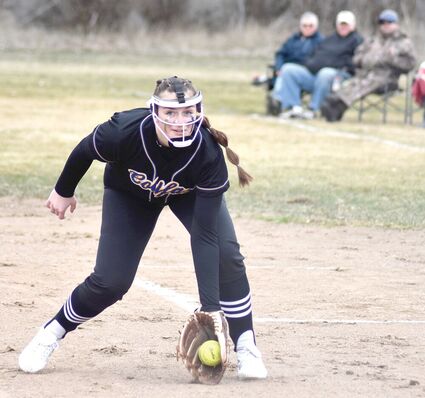 Junior Delaney Imler fields the ball on a hit down the first base line.

But Colton pitcher Maggie Meyer excelled on the mound, pitching a one-hitter and striking out 10 batters in the nonleague event.

The nightcap was a different story, as the Wildcats girls rattled off several hits.

Colton dominated Sunnyside Christian and came home with a 20-3 win over the Knights.

Colton's Rachel Becker went 2-for-4 with three RBIs in the win.

Both teams are in District 9, but the doubleheaders was a nonleague affair.

The Timberwolves were scheduled to play Liberty (Spangle) in a nonleague game Tuesday night.

The Gazette went to press before the results were available.