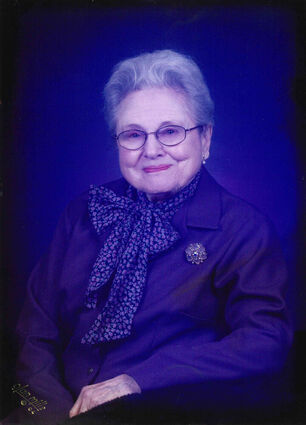 Jeanne was born the daughter of Hans Adolph and Ethel Belle (Polson) Hansen on November 25, 1918 at the family home near Oakesdale, Washington. She married Harold Owen (Toots) Ellis on September 17, 1938 in Natches, Washington. They farmed and lived in and around Oakesdale all sixty-three years they were married. Toots died October 7, 2001.

Five months later, Mom moved to Broadway Court Estates in Spokane Valley where she lived for fourteen years, only moving to The Courtyard at Colfax in 2016 when her heart started having A-Fib episodes. In 2017, at the age of 98,

she had a heart valve replacement that was meant for quality of life. When Covid was starting, it was determined that she had developed Pulmonary Fibrosis and was put on Hospice in August of 2020.

Mom was a hard worker. She could drive truck in harvest, she was Dad's best hired worker, put a beautiful dinner on the table for however many were there that day. She sewed all her clothing and enjoyed all of her beautiful wardrobe of blouses after she was not sewing so much anymore. The family favorites were her Cinnamon Rolls, Fried Chicken, her Chocolate Cake and her Spaghetti and Meat sauce. Besides sewing, baking, cooking, she also knitted, crocheted and tatted.

Our family wants to acknowledge the part that Dr. Singh and the staff at The Courtyard at Colfax has had in the care, physical and medical in Mom's life. THANKS so much to ALL, you helped GOD meet Mom's needs.