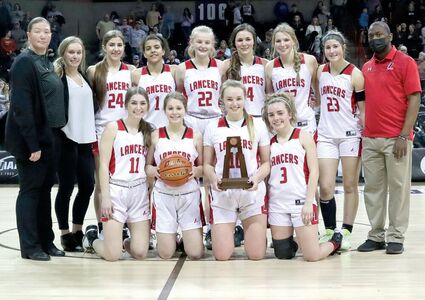 SPOKANE - The Liberty Lancer girls have beaten the best and have been beaten by the best this season.

The Spangle-based Liberty team was 1-2 against league rival Colfax and defeated No. 2 ranked Warden in regional action, handing the Cougars their only loss of the year.

After losing to Colfax again in the semifinal round of the state 2B tournament, the Lancers matched up with No.4 Okanogan in the battle for third-place.

Liberty jumped out to a 17-7 lead after the first quarter.

But the Lancers cooled off in the second quarter and the Bulldogs clawed their way back in it, down 28-23 at the...