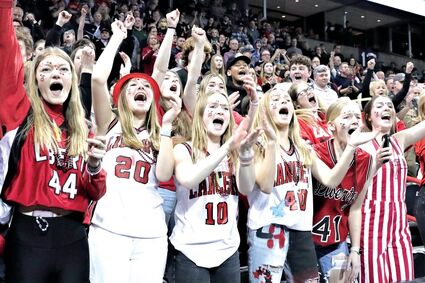 Lancer fans cheer on their team.

SPOKANE - Tayshawn Colvin scored a game-high 28 points and the Liberty (Spangle) Lancers got past the Brewster Bears, 64–55, at the Spokane Arena on Saturday, March 5, to claim the school's second state championship.

The last title for the boys was in 1986 when Liberty beat Bi-County League rival Reardan, 61-44.

The Lancers are a ragged group that often played like tough football players.

They reluctantly give up easy scores, and such was the case in this game as Brewster had to move the ball well to get their points.

The Bears were somewhat handicapped with their leading scorer and re...