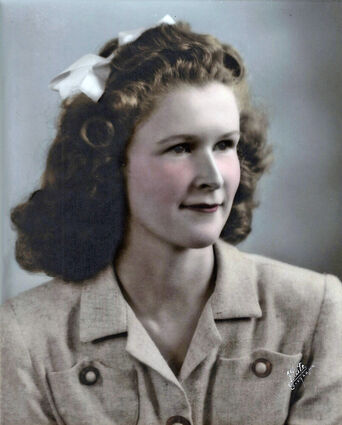 Lucile was born Feb. 8, 1927, to Milton and Merle (Arrasmith) Ensley in Colfax, joining three older brothers, Melvin, Milton, and Allen. Her childhood home was built in 1890 by her grandfather, Henry Ensley. As a young girl, she attended the Onecho Country School two miles away from her home. Her daily commute would vary between riding her horse, her bicycle, or walking.

Her first year in high school, a handsome upperclassman named Marshall Miller caught her fancy. She invited him to join an ice skating party on a pond at the Leslie Rubin home. The invitation was a success, and the ice skating party was the first day of what would become a lifelong relationship. These were happy times, but the threat of war loomed everyday.

Eventually Marshall joined the navy and was deployed to the Pacific theater. To stay in touch, daily letter writing was paramount, counting the hours until the war's end. Meanwhile, in 1945, Lucile graduated as salutatorian from Colfax High School. Two years after he left, Marshall was granted an early discharge due to the death of his father and the subsequent need to take over the farm.

They married on April 10, 1946, marking the beginning of not only their marriage, but also their lifelong farming career. Son Doug joined the family in June of 1947, followed by Roger, Cathy, and Dean. Their home was filled with love, good food, and happy memories. Marshall and Lucile had a strong marriage and celebrated 68 anniversaries together. Making their home in the Onecho area for 57 years, moving to the Courtyard in 2014, Marshall passed in January of 2015.

Lucile's relationship with her Savior motivated her every day. She raised her children and took correspondence courses through Moody Bible Institute and Child Evangelism Fellowship. Her heart was centered at serving in her local church, she taught children in Sunday School, Vacation Bible School and Camp. She led ladies' Bible studies and adult Sunday School classes. She felt that teaching was a gift from the Lord and she used it to honor and glorify Him. Along with being a voracious student she was an avid gardener. She cultivated a huge garden to supply the needs of the family (and extended family) throughout the winter. Her generosity and hospitality were her stellar hallmarks. She had an open table where everyone was welcome: family dinners, youth group gatherings, overnight retreats, after game parties, and more. Visitors were always welcomed and food was plentiful and delicious.

Marshall and Lucile's love was not limited to their own children and many have known the joy of being welcomed into their extended family. Their love was deep and unconditional. Her conversation skills were second to none! For those who loved her, visiting Lucile was one of life's greatest delights. The Fruit of the Spirit was vividly seen in this woman we call Mom, Grandma, Grandma Great, Grandma Great Great, and friend. A great and tireless prayer warrior, her impact is far reaching, beyond what we can ever know. Her home was a source of acceptance, security, a sanctuary to many, a safe space. She, a blessed friend and confidant. She is sorely missed.

She leaves behind a rich legacy of her four children, Doug (Loretta), Roger (Marilyn), Cathy (Alan), and Dean (Freda), 12 grandchildren and their spouses, 29 great-grandchildren and spouses, and three great-great grandchildren. She was preceded in death by her husband and her three brothers. 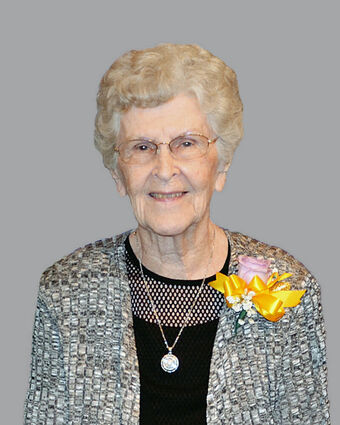 Committal is scheduled for Friday, February 11, at the Onecho cemetery at 10:00 a.m., with memorial service to follow at Colfax First Baptist Church at 11:30. Viewing will be Thursday, Feb. 10, from 2:00 to 4:00 p.m. at Corbeill Funeral Home in Colfax. On-line guestbook is at http://www.bruningfuneralhome.com.

The family suggests memorial gifts be made to Colfax First Baptist Church Missions or the Union Gospel Mission, Spokane. Corbeill Funeral Home of Colfax is caring for the family.