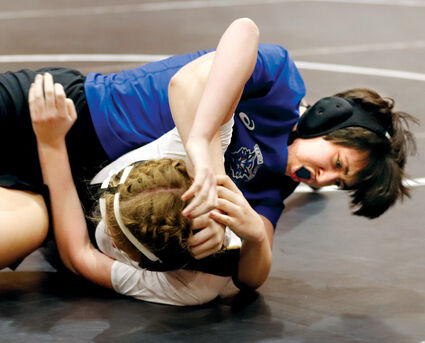 Tekoa-Rosalia freshman Alexis "Lulu" Taylor drives a half-Nelson on Brianna Smith of Mary Walker, pinning her in the second round Saturday in Springdale.

Wrestling at 145 pounds, freshman Alexis Taylor pinned both of her opponents in the second round.

In her first bout, she wrestled Brianna Smith, of Mary Walker. In her second match, she pinned Jada Wood, of Republic-Curlew.

She pinned both opponents using a half-Nelson after taking the up position on Round 2.

With the pins, Taylor extends her record to 5-0.

Taylor was the only Tekoa-Rosalia wrestler to compete in the double dual.

The Timberwolves are next scheduled to take the ma...