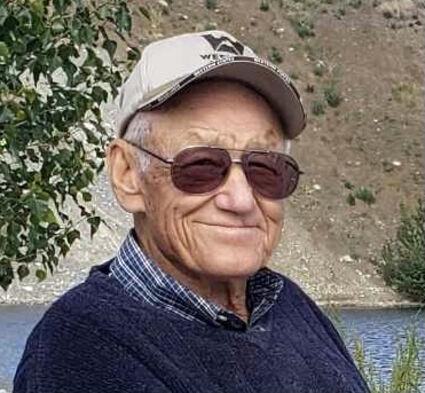 Derwin, Lelah and Burgess moved to the Palouse to farm with Lelah's parents, Francis Freemont and Sarah Kellsy Burgess, just in time for the crash of 1929. His brother Willard was born in 1931. The family milked cows, sold cream, and farmed to survive.

Burgess attended Washington State College studying Agriculture/ROTC and found the love of his life Maxine Farr, of Albion, at an AGR after-dinner dance. He graduated in 1951 and was commissioned into the Air Force as a lieutenant, stationed in Spokane and Guam.

Burgess and Maxine were married June 14, 1953, in Pullman at the Greystone Presbyterian Church. They joined the Lange family in the sheep business. Lambing in Pasco and grazing sheep back to the Palouse while Maxine taught school.

A farm near Garfield was purchased from Roy Cochran. This would be their forever farm-home.

Burgess was active in Farm Bureau, Garfield School Board, First Baptist Church and his coffee groups. Burgess enjoyed golfing with family and friends.

In 1972 Burgess came back from a cattle sale in Lewiston and proclaimed he had purchased an airplane. When asked if he knew how to fly, he proclaimed, "Not yet!" Then followed 40 years of flying tours from Alaska to Guatemala, seven winter tours through Mexico with The Flying Farmers, and a lifetime of friends and memories.

Farming, haying, cattle, flying and winters in Arizona - Burgess and Maxine were very good at the life they so enjoyed. Including watching and participating in the expansion and growth of their family.

Burgess' dry sense of humor, beautiful smile and eye twinkle will be treasured by all. He enjoyed his coffee hours with friends in Garfield, Palouse and Colfax.

The family is so grateful and blessed by Dr. Johnson, Dr. Singh and the Whitman Clinic/Hospital nurses and staff. The Courtyard staff's expertise, care and love to Mom and Dad is treasured. Thank you Hospice.

A small family service was held on Dec. 3, 2021. Bruning Funeral Home helped with the arrangements. Donations can be given to the organization of your choice.

We all salute the greatest generation that ever lived! Thank you!