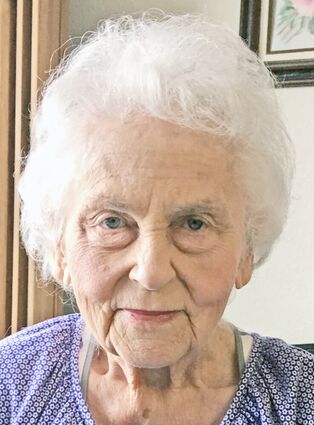 Verda and her family moved to LaCrosse, Wash., when she was three years old. She attended school there graduating with the class of 1952. When she was in the 8th grade, she met Bonnie Bigsby and the two were married on August 30, 1952, following her high school graduation. They made their home in LaCrosse and were later sealed in the Church of Jesus Christ of Latter-Day Saints Seattle Temple on May 18, 1985.

Verda was very devoted to her faith. Together her and Bonnie served a church mission in Fullerton, Calif. She served as a counselor for Relief Society, was a Seminary teacher, and was also a gospel doctrine teacher.

Verda served her community volunteering for many actives but most importantly Verda was a homemaker. She was famous for popcorn balls. Around Halloween every year people would travel from everywhere to have one of her popcorn balls. She was known for being a great baker. She even won the title "Wheat Queen" at the Palouse Empire Fair for a loaf of bread she baked.

She was very giving. You could often find Verda offering rides or delivering meals to someone in need. She would even open up her home to youth children in need. Above all Verda was a loving wife, mother and grandmother.

The funeral Service will be held at 11:00 AM on Tuesday, December 14, 2021, at the Colfax Church of Jesus Christ of Latter-Day Saints, 2652 Almota Rd. Viewing will proceed the service at 10:00 AM in the church's Relief Society Room. Dedication of the grave will follow at the LaCrosse Cemetery. Friends may also call at Bruning Funeral Home in Colfax on Monday from 9 a.m. to 5 p.m. Bruning Funeral Home in Colfax, Wash. has been entrusted with arrangements.

Memorial donations are suggested to the Autism Science Foundation. Online condolences may be sent to http://www.bruningfuneralhome.com