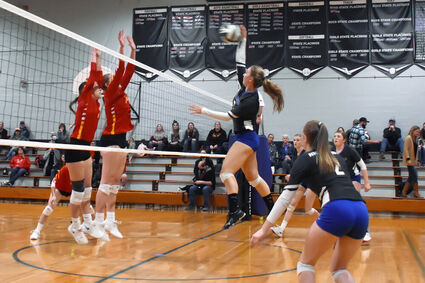 Junior Gianna Anderson delivers one of her kills to help Oakesdale to an undefeated regular season.

OAKESDALE - The Oakesdale Nighthawks defeated the St. John-Endicott-LaCrosse (SJEL) Eagles in their final game of the season.

Oakesdale ended the season undefeated with a 10-0 1B Southeast League record. Their next game is the opening round of District 6 playoffs against an undetermined opponent on Nov. 2.

The Eagles' loss leaves places them in second place in the league.