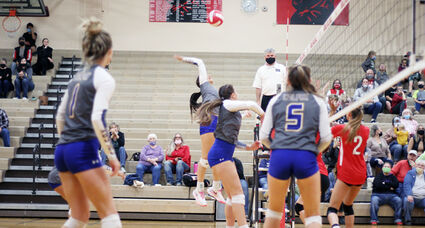 Colfax prepares to score in the game against Davenport on Oct. 19.

DAVENPORT - The Colfax Bulldogs certainly looked like the top dogs in Davenport as the young Gorillas fell in three sets.

The Bulldogs are the No. 1 ranked 2B volleyball team in the state in the WIAA RPI rankings.

Davenport fell to 2-11 with the loss. Colfax improved to 11-0 with the win and has only lost two sets all season.

Colfax came out swinging at a very young Gorillas squad that at times, didn't h...