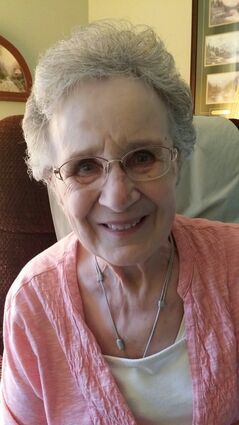 Maryette Yvonne Camp (née Miller) died October 23, 2021, at age 85 of natural causes in Yakima, WA. She was most proud of being a rancher's wife. She felt her biggest accomplishment was working alongside her husband, Larry Camp, with whom she had a wonderful and fulfilling partnership. Maryette was born on October 6, 1936, in Walla Walla, Washington, at St. Mary's Hospital where her mother Christine Miller had completed her nursing training. Maryette started life in Hay, Washington the oldest child of Albert & Christine Miller. During her childhood in Hay music was very important, playing the piano and organ. She started playing for church in high school and played for many years including many weddings and funerals.

At 16 years old Maryette started cooking for harvest crews helping her grandmother who had been in a car accident and could not cook for the farm crews. Maryette was famous for her pies, especially her flaky pie crust. She went to Hay High School until her Junior year and then went to Lacrosse High School where she met Larry Camp, a classmate.

Maryette was the Lacrosse HomeComing Queen and rode the Lacrosse float at the Whitman County Fair 1953. She graduated from Lacrosse High School in 1953 the same class as her boyfriend Larry Camp, who became her husband on August 29 1954. It was a relationship that lasted over 45 years. She spent the year after High School taking care of her grandparents Chris & Milly Bennett who were hurt in a car accident. Then after marriage was a proud farm wife at the Willow Creek Camp wheat ranch near Lacrosse. In 1968 the family moved to Connell to run the cattle ranch of Larry's father, Herb Camp.

Maryette loved riding in the semi-truck with Larry as they hauled cattle around the Pacific Northwest. She also enjoyed working the cattle as she was a farm woman through and through. She enjoyed gardening which she got from her grandmother (who was originally from England) and had a beautiful flower garden. She always had plenty of food and was known for inviting neighbors in for a meal when they would drop by the ranch. She enjoyed swathing and baling hay which was used on the ranch to feed the cattle in the winter.

Maryette Yvonne Camp is survived by her son, David Camp of San Diego, Calif .; daughter Laurie Camp of Yakima, Wash .; sister Janet Langlois of Grayford, Texas; and brother A. Richard (Dick) Miller of Cheney, Wash. Her husband Larry Camp predeceased her in 1999. The family would like to thank Maryette's caregivers, Yolanda, Christina and Amanda who provided excellent, loving care. Memorials in lieu of flowers may be sent to Lacrosse, Wash. Cemetery. A graveside service will be held Monday, November 1, 2021 at the Lacrosse, WA Cemetery. Bruning Funeral Home of Colfax is caring for the family. On-line condolences can be made at http://www.bruningfuneralhome.com.