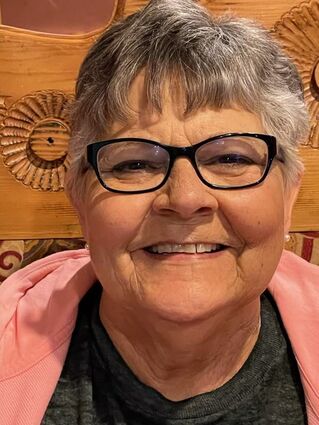 Karen "Krenny" Hammer, 70, longtime Colfax/Steptoe area resident, passed away Saturday, October 16, 2021, at Sacred Heart Medical Center in Spokane. Funeral Services will be held Saturday, October 30, 2021, at 11 a.m. at Bruning Funeral Home in Colfax. Burial will follow at the Bethel Cemetery, Steptoe. Viewing for Krenny will be Friday from 9 to 5 at the funeral home.

Karen was born August 19, 1951, in Tonasket, Washington, to Bruce and Ellen Nilson Gavin. She grew up in a large family where she was one of seven children. They moved to Oroville when she was young and she grew up on a dairy farm there. In high school she played basketball and on the all-girl football team. She graduated from Oroville High School in 1969.

She met Ronald Hammer through mutual friends and they married on September 26, 1969. She worked as an apple packer for some of the local orchards and also provided some childcare to area families. They made their home in Okanogan where she went to work for the State Department of Labor & Industries as an office clerk. She coached and officiated soccer games around Okanogan too. In 1985 they moved to Colfax and she worked for the District Court for a couple of years.

Krenny began a long career with Washington State University as a program manager for the high school equivalency program and then later as a conference coordinator for many years. She retired after 32 years of service to WSU. For the last twenty years or so they have lived near Steptoe where she marveled at the beauty of Steptoe Butte from her front door.

She enjoyed camping and most especially when the grandkids were going to be there as well. She loved cactus plants and succulents and raised hundreds of them. Her greenhouse was overflowing with her treasured plants. Krenny was a football fan for sure. She was an avid fan of the Colfax Bulldogs, a huge Seattle Seahawks fan, and loved Cougar football. She and Ron enjoyed visiting the casinos as well.

She is survived by her husband, Ron, at their Steptoe home; sons Scott (Mary) Hammer of Reubens, Idaho, and Matt (Shauna) Hammer of Colfax; her 4 grandchildren of whom she was so proud, Tara (Josh) Nellis, Carson, Gavin, and Brice; and by her 6 siblings, Chuck, Judy, Dale, Dave, Sue "Babe" and Peggy. Karen was preceded in death by her parents. The family suggests memorial gifts be made to the American Cancer Society. On-line guest book is at http://www.bruningfuneralhome.com