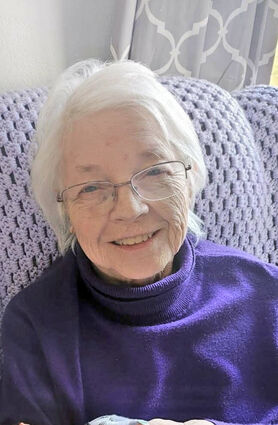 Our beautiful mother, Rita Mae Zellerhoff Moneymaker, 80, of Uniontown, Wash., passed away Saturday, October 9, 2021, at Tendercare Home in Clarkston, Washington. She had recently celebrated her 80th birthday with her family.

Rita was raised by her father and sisters after her mother Agnes died when she was two years old. She attended Notre Dame Academy, an all-girls academy in Colton, and was known for her beautiful singing voice. After graduation she moved to Clarkston and worked for Potlatch Federal Credit Union. She met Maurice Moneymaker at a dance and they married in September 1960. They lived in Yakima and Pullman, finally settling in Uniontown to raise their family.

She worked at Washington State University as one of the original computer catalogers at Holland Library. After 28 years, she retired in 2002. She went back to school while working at WSU, graduating in 1993 with a degree in English and a minor in Spanish.

Rita was an excellent writer of funny short stories and used her Spanish skills when foreign exchange student Carlos Garcia came to live with the family.

Rita and husband Maurice loved to travel throughout the United States and Canada. They took a cruise on the Rhone River and also travelled to Israel, Egypt, Jordan, Ireland, and Germany.

She was active in breast cancer awareness causes as well as singing in the St. Boniface church choir and with her sisters in nursing homes as a member of the Singing Zs.

The rosary will be held Saturday, October 23rd, at St. Boniface Catholic Church in Uniontown beginning at 10 a.m. A funeral mass will follow at 11 a.m, and then burial will occur at the Uniontown Cemetery. Kimball Funeral Home of Pullman, WA has been entrusted with arrangements.

The family would like to thank the wonderful and loving staff and residents at Tendercare Home and Elite Hospice in Clarkston. Memorial gifts may be made to St. Boniface Endowment Preservation, P.O. Box 126, Uniontown, WA 99179. Online condolences may be sent to http://www.kimballfh.com