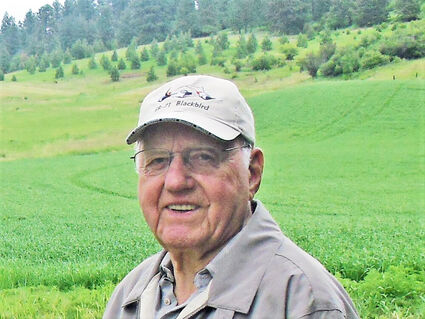 Wallace "Wally" James Bodker, age 98, of Camano Island, Washington, passed away October 1, 2021, at home with his family. He was a warm, caring man with a great sense of humor, an unwavering love of the Palouse and was always appreciative of life.

Wally was born January 19, 1923, in Dayton, Washington, the son of Peter and Anna Marie Bodker, he was the oldest of two sons. He briefly served as an aviation cadet in the U.S. Navy during WWII, returning home in 1943 to farm in Palouse. Later he attended the University of Idaho. Wally enjoyed hunting in the Blue Mountains with his father, friends and his horse, Mike. He helped his dad build a large barn in 1945 that stands on the family farm today.

In 1948 he married Shirley Mae Williams, while she was attending Washington State University with his cousin Patricia (Johnson) Pfaff, who introduced them. After farming for a few years, they moved to West Seattle, and raised three children. He was employed by The Boeing Company, working on the early airplane programs. In the early 1970s he became a manufacturer's representative and did extensive traveling around the Northwest region. Wally was a dedicated docent for the Museum of Flight in Seattle. Always interested in technology and aviation, his favorite plane was the SR-71 U.S. spy plane, which he helped assemble for display at the museum.

Wally loved to be outdoors and for most of his life he enjoyed hunting, fishing, and camping with the family. Later in life he took up golf to continue to be active outdoors. In addition, Wally was a well-known handy man who could fix almost anything. He even made his own golf ball retriever.

In 2003, Shirley, his beloved wife of 55 years passed with Wally at her side. In 2006 Wally married Ramona (Hope) Nielsen of West Seattle. They made their home together on Camano Island, Washington, where they enjoyed golfing, gardening, friends, and family.

We are all blessed to have known such a genuinely loving husband, father, grandfather, and true friend. Wally was respectful, courteous, and kind to all during his life. Even during his time of decline, Wally never wavered from his core beliefs tempered with common sense and all were drawn to his side as he prepared to return home to the Palouse.

Wallace will be laid to rest in Palouse, Washington. In lieu of flowers donations can be made to The Museum of Flight in Seattle.