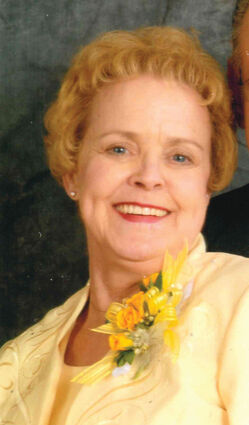 Penny Gay, 80, went home to be with her Lord and Savior on September 25, 2021, surrounded by family at home. She was born at the family farm near Onecho to Chet and Juanita Holbrook on March 2, 1941. Penny was the sixth of seven children, and grew up on the farm. She graduated from Colfax High School in 1959 and married Russell Gay on June 13, 1959.

Russ and Penny resided several places in the area before moving back to the Holbrook family homestead. They continued to farm and ranch there for many years. Penny enjoyed being a mom, homemaker and fulltime farmer’s wife. Penny’s day began well before sunrise and ended well after sunset. She was famous with harvest crews for her homemade applesauce, dinner rolls, cinnamon rolls and dill pickles.

In 1980, Penny went to work at Colfax Flowers. She loved the job and learned flower arranging from Bobbie Pfaff. Bobbie was one of her closest friends. She worked there until the flower shop closed. Penny had several other jobs. She worked for Dr. Schmidt (an optometrist), Seafirst Bank, and a short time at Whitman County Grain Growers. She also served as vice president of the Washington State SIDS organization. During the Vietnam War she was a volunteer with AMCROSS where she assisted with getting service members home when a family member was ill or had passed away. Penny supported the American Red Cross blood program for 30 years. She was also a member of the Whitman Community Hospital board and a past president of the hospital auxiliary. In addition, Penny was secretary/treasurer for the Holbrook Heirs farm. She also served on various committees at Onecho Bible Church.

She, Russ and the family took care of Onecho cemetery by mowing and trimming on weekends. Following their farming career, Penny and Russ worked together for 20 plus years in the custodial business they started. Penny enjoyed cooking, gardening, growing flowers and vegetables. Penny and Russ attended Onecho Bible Church. She enjoyed many years of serving on the potluck dinner committee.

Penny is survived her husband of 62 years, Russell Gay; their four children, Sandra (David) Hill of Cheyenne, Wyoming, Lisa (Aaron) Hammond of Longview, Washington, Ted (Anne) Gay of Spokane, Washington, and John (Jodi) Gay of Pullman, Washington; by her brothers Pat Holbrook of Spokane, Washington, and Greg Holbrook of Garfield; she also leaves 10 grandchildren and five great-grandchildren, all of whom she was very proud of. She was preceded in death by her parents Chet and Juanita Holbrook, brother David, and sisters Kathleen, Sheila, and Cynthia and by a granddaughter, Alauna.