Swarm of planes for breakfast 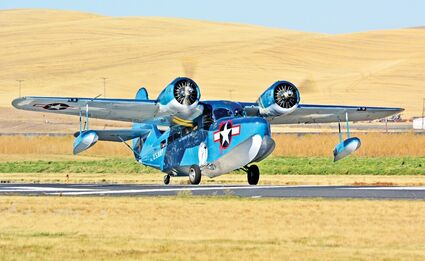 Addison Pemberton, of Spokane, flew a 1942 Grumman G-21A Goose to Colfax on Sept 25. The Goose is an amphibious used for transport during World War II.

COLFAX – The skies around Colfax were buzzing with the sound of 40 airplanes taking part in the Experimental Aircraft Association (EAA) Fly-In.

"Airplane nuts just love watching airplanes," said fly-in coordinator Barney Buckley. "The breakfast is the big deal. They come for that and to see the airplanes."

The Port of Whitman Business Air Center was where 160 people ate breakfast, toured the parked airplanes, bought rides, and for some - flew home.

"We were quite pleased with the turnout," said Buckley. "We didn't have any e...