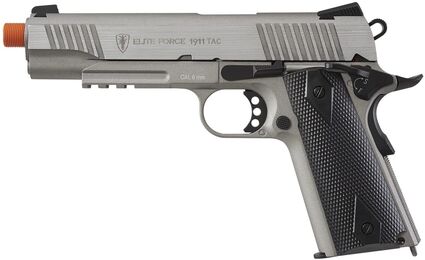 A silver plastic 1911-type replica pistol similar to what is pictured was reportedly used to threaten two people in Uniontown.

UNIONTOWN – They knocked on the Uniontown home front door looking for their dog, instead they found a pistol aimed at them.

Two people were looking for their missing dog and stopped at a house in the 200 block of Owen Street on Sept. 24. A man opened the front door and aimed a silver Colt 1911-type pistol at them, according to Sgt. Dan Brown of the Whitman County Sheriff's Office.

"According to the victims, the male threatened to kill them and whoever else was on his property," wrote Brown.

The victims tried to explain they were looking for a dog as the man allegedly continued pointing...