Gorillas' experience paid off against Colfax 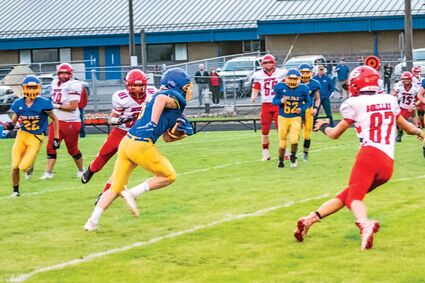 COLFAX - The young Colfax Bulldogs football team met the Davenport Gorillas for their opening game of the season on Sept. 3, and lost 40-14.

"We knew that would be a tough first draw," said Colfax Coach Mike Morgan. "We're starting a lot of young guys. Davenport is a very experienced ball club. We knew that coming into the season."

The first score was Davenport moving the length of the field to score the first touchdown of the night on a 45-yard run.

Colfax was driving downfield and reached the 6-yard line. Then the Bulldogs fumbled.

The Gorillas took possession and drove it 94 yards for...