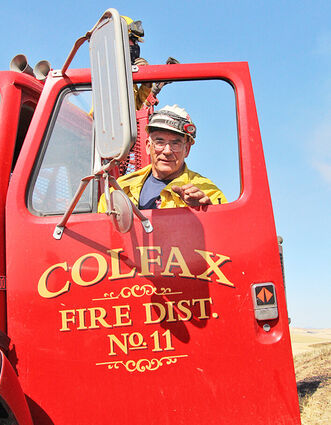 James Earl Krouse, 76, longtime Colfax Fire Chief and lifelong resident of Colfax, passed away Saturday afternoon, August 28, 2021, doing what he loved to do; serving his community. Jim collapsed while fighting a wild fire just on the outskirts of town and was rushed to the Whitman Hospital by his fellow firefighters where he died of an apparent heart attack.

A funeral service honoring Jim will be held Friday, September 10th, at 1:00 PM at the First Baptist Church in Colfax with burial following at the Colfax Cemetery. Friends and family wishing to pay their respects may do so at Bruning Funeral Home on Wednesday and Thursday from 8 a.m. to 5 p.m.

Jim was born June 19, 1945, in Colfax to Earl and Lois Thompson Krouse. He grew up in Colfax with his younger sister Kathy. Their parents both worked for Powell's Plumbing. His dad as a plumber and mom as a bookkeeper. Life seemed good for a while growing up and then Jim's dad died when he was only 13 and his mom began suffering from the effects of M.S. Things got tougher at home and in 1962 Jim started work in the small town grocery store, the S & S Grocery, for 85 cents an hour. He delivered groceries after school and did all the other menial tasks that come with such a job. He was happy to have the work. He graduated from Colfax High School in 1963 and continued learning everything he could at the grocery store. He had no plans to go to college and his family didn't have the means to send him even if he did. Ray Nelson, the owner of the grocery, asked Jim if he'd like to learn to cut meat. Jim said, "I'd love to" and Ray said, "Good, you have two weeks to learn". His regular meat cutter had just given his two weeks' notice. Jim completed the Toledo School of Meat Cutting in 1965 and thus began his long career in Colfax as a trusted and well respected meat cutter.

Jim and Mildred Elaine Morris were married in Colfax on July 8, 1967. They made their home in Colfax; raising their son Daniel and daughter Lynda in a home filled with love and warmth. Jim worked at the S & S until 1971, for Excell Foods from 1971 until 2001 when it became Rosauer's and he finished his career there in 2010 after more than 45 years in the meat department. He could often be found in the aisle of the store talking to customers or helping them make their selections. Jim loved hunting and fishing, and he often helped others with custom butchering.

He followed in his father's footsteps when he joined the Colfax Volunteer Fire Department in 1967. He completed his training as an Emergency Medical Technician in 1972 and responded to numerous calls for aid and assistance for more than half a century. Jim epitomized what it meant to be a volunteer. He gave back to his community in the most unselfish acts of service, often at the expense of family fishing trips or backyard birthday parties, and never gave it a second thought. He was elected Chief of the department in 1973 and served in that capacity for 40 years. At the time of his death Jim was Chief Emeritus and continued to answer more calls for service than most. He truly lived for, loved, and thoroughly enjoyed being a member of the fire department. He was also a long time member of Whitman County Fire District 11 and had served in all the same capacities in that department. His legacy of service to his community is long and distinguished but it's also worth noting how much he loved his family, his God, and his neighbors and friends. Jim was humble and kind. Lifelong friendships and relationships abounded as Chief Krouse truly was a leader, a teacher, a mentor, a friend to so many in fire service that it was like one great big family.

He was very much a family man, devoted to his wife and kids. He absolutely loved spending time with his grandkids and you could see his eyes light up each time he spoke of the great-grands. He was active in the Colfax Church of the Nazarene and a member of the Gideon's. He helped countless public servants through tough patches in their careers as an integral member of the Critical Incident Stress De-briefing team. In later years, he really enjoyed tending his large garden and taking care of "the farm", his little two acre patch that he truly loved. Some of Jim's most treasured memories were of hunting camp in the rugged canyons of the Blue Mountains. He enjoyed many seasons of packing in with the same group of guys and each helping the others with the season's bounty. He liked to tell hunting or fishing stories with anyone he could, enjoyed long conversations on the phone with son Dan about firefighting or life in general, visited daily with daughter Lynda at City Hall or just catching up across the fence at "the farm". He looked after his wife Elaine with the love and devotion of a caring husband and they enjoyed going for drives, camping, or canning peaches together. Being together was the point.

Jim's legacy will be long lived in Colfax and he will be missed by many in this community. He is especially missed by his wife of 54 years Elaine at their home; his son Daniel and his wife Sheila Krouse of Chewelah, Wash., daughter Lynda and her husband Rich Kramlich, Colfax, his foster-daughter, Kim Clark of Davenport, Wash .; by his eight grandchildren of whom he was so proud, Amanda (Dustin) Link, Ashley (Keith) Luft, Bryce Kramlich, Kaitlin, Conner and Kaden Krouse, Tyler and Coy Stout; five great-grandchildren, Braxten, Kinslee, Grady, Hadlee, and Kenedi; and by his sister, Kathy (Jerry) Vosberg of Yelm, Wash., and numerous extended family and friends. Chief Krouse also leaves his second family at the fire department who will strive every day to follow the example that he set. He was preceded in death by his parents and by a half-brother, Walter Leon Krouse. The family suggests that memorial contributions in his name be made to the Colfax Volunteer Firemen, P.O. Box 226, Colfax, WA 99111.

Elaine was always concerned about Jim being in the fields fighting fire, he said, "don't worry the guys always take very good care of me," and they did until the very end.

On-line guest book is at http://www.bruningfuneralhome.com