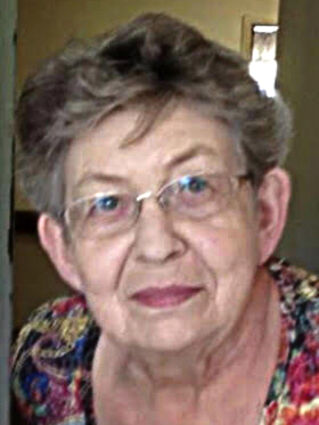 Judy was born on September 25, 1941, in St. Maries, Idaho, to Lawrence P. "Mike" and Evelyn Gage Babbitt. Judy graduated from Plummer High School and went on to a two-year business program in Spokane. She worked at Willmschen Insurance in Rockford, Washington, for several years during which she met Arthur Helmke at Leo's Supper Club in Worley. Art and Judy were married on October 11, 1969, in Plummer. Son Mathew joined them in August 1970 and son Tim in December 1971. They started their family in Rockford before moving to Farmington, Wash., in 1973. Judy worked for many years at Oakesdale Grain Growers Hardware Store in Farmington – which included weighing trucks every harvest for many years. When the store closed, she worked at the Whitman County Prosecutor's Office until she retired in 2007.

Judy enjoyed cooking, baking, canning, her flower gardens, spending time with her kids and grandkids, reading cookbooks, surfing Facebook and spending time with her cat, Sophie. She never missed a game or performance as her kids grew up – always cheering from the sidelines and providing the necessary snack or fix-it from her purse. Judy also enjoyed watching her grandkids in their various endeavors and sporting events. Judy was even starting to understand the game of soccer. Her freezer jam was always a hit (especially with her grandkids) and her freezer pickles were shared with many friends.

Over the years Judy was active in many different organizations: Rebekah Lodge, Farmington Garden Club, Eastern Star and Red Hats.

Judy is survived by sons Mathew (Angela) Helmke and Tim Helmke; and grandchildren Jacob Helmke and Chesney Helmke, all of Moscow. Preceding her in death were her parents, brothers Edwin, Thomas, Lawrence (Jr.) and Robert and sister Joanne, and her beloved husband.

A graveside memorial service will be held at 10:30 a.m. on Tuesday, August 24, at the Garfield Cemetery with Pastor Michelle Ellinwood officiating. A reception will follow at the Farmington Seventh-Day Adventist Gymnasium.