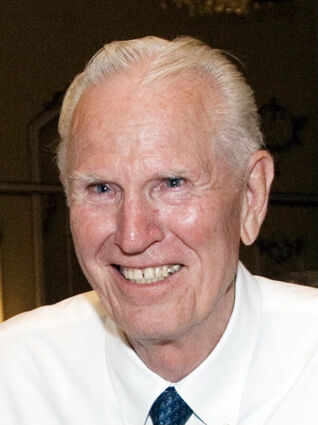 Lloyd G. Johnson passed away peacefully, surrounded by his family, at Whitman Hospital in Colfax, Wash., on Saturday, July 17, 2021. He was 92.

Lloyd was born on April 30, 1929, in Republic, Washington to N. Gust and Gerda Johnson, the youngest of 10 children and a proud Swede. The family moved to Ione, Wash., and then to Newport, Wash., where he spent his school years and graduated in 1947. He was offered a football scholarship to Stanford University, but instead accepted a basketball scholarship to Gonzaga University. After three years at Gonzaga, he was drafted into the U.S. Army during the Korean War. Following his time in the service, he attended pharmacy school at the University of Washington and became a life-long Husky fan. Apple Cups always became a highly contested family affair as his four children are proud Washington State University grads.

While in Seattle, he met the love of his life, Joyce Toreson. They married on December 26, 1955, and were blessed with five children. After graduation, he worked at Bates drugstore in downtown Spokane for ten years. In November 1966, Lloyd and Joyce moved their young family to Colfax, Wash., after purchasing Tick Klock Drug; the business continues to remain in the family. Lloyd passed on his strong values of family, faith, and hard work to his children and grandchildren. Some of his happiest times were spent with family and friends at his cabin on Lake Pend Oreille. He spent hours fishing, playing cribbage, and telling stories or jokes to the family. During their retirement years, Lloyd and Joyce spent 14 winters in Sun City, Ariz., as well as enjoyed many trips around the country and world.

A funeral service is scheduled for Tuesday, July 27, at 11:00 AM, at Peace Lutheran Church in Colfax, followed by a luncheon reception at Hill Ray Plaza. Memorials are suggested to Whitman Hospital Foundation, Peace Lutheran Church, Shriners Hospital for Children, or a charity of donor's choice.