Started as reserve deputy two years before being hired 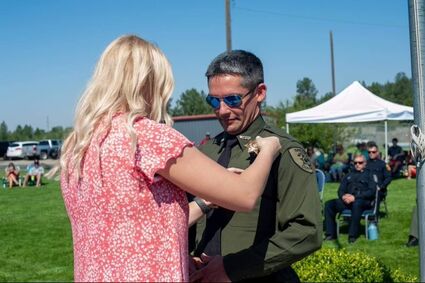 Randy Miller's sister pins his badge on him.

COLFAX - Randy Miller served Colfax as a volunteer firefighter for years and now he is the newest deputy for the Whitman County Sheriff's Office.

"I've known of him for the last 10 years through the fire department," said Undersheriff Chris Chapman. "I don't think there is a person who doesn't get along with him."

Miller returned from the Basic Law Enforcement Academy in Spokane on July 7 and began his field training two days later. He joins the 18 deputies working for the sheriff's office.

He's a volunteer firefighter for the Colfax Fire Department and worked at Spokane Seed Company in Col...