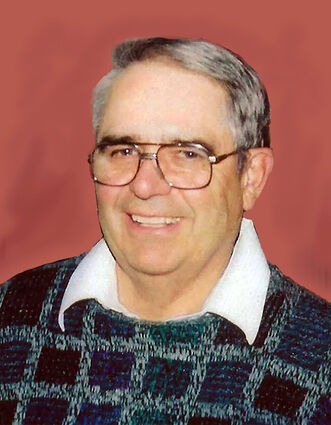 Hey God – how are things going up there in heaven? By now, we're sure nearly everyone has met our dad, Ray... and he's told them all about his family, friends, and community. He's having a great time with Grandma Isabelle and Grandpa Norbert, his brother Donny, and Grammie Virginia. Hopefully he's even met mom's daddy, Ambrose Reisenauer, for the first time. He's probably been fishing too! He will have some work cut out for him... he'll make the best guardian angel for mom, Kim, Chris, and Cammie. His granddaughters will be right up there on the top of his "watch over" list.

Dad was born Dec. 27, 1941, the second of eight children, to Norbert and Isabelle Heitstuman. Ann, Dad, Carl, Donny, Linda, Peggy, Kathy, and Mike – quite a team! They lived on the family farm, south of Uniontown. Grandma and Grandpa led by example for their kids: work together, give and take, love each other, and have faith in God. That didn't mean there wasn't mischief: dad and his brothers would sneak drinks of grandpa's whiskey but added water back so grandpa wouldn't know they'd been in it. They did get caught once there was more water than whiskey! Basketball was dad's favorite sport, and he spent hours shooting at a hoop set up in the barn loft. He was on the Colton high school team and later played on town teams for years. Dad graduated from Colton High School in 1960 and received the top athlete award at graduation. After high school, dad moved to Seattle to work for Boeing. He didn't stay long... maybe he was missing his girlfriend, Susan, too much.

Dad was four years older than mom. She says she fell in love with him when she was a freshman, but "he didn't have time for her". She had to chase him for a couple of years until he caught her! They married Nov. 20, 1963. Dad worked at Potlatch Mill when they were first married. Each summer, dad would cut one of Grandma Isabelle's roses and bring it home to mom. Shortly after Kim was born, they bought a small house in Uniontown. Chris and Cammie weren't far behind. Dad loved kids and played with our cousins and us: giving piggyback rides, playing card games, biking, camping, waterskiing when we were older, taking 4-wheeling trips, hunting, and fishing. He made us wonderful wooden toys. There wasn't an hour too early to get up and go fishing! As kids, we learned to be quiet on a boat because "fish can hear you!"

An opening at the Uniontown Co-op allowed dad to work closer to home. During harvest, he managed the Leon elevator. It was hot, dirty, and didn't have air conditioning. In the afternoon, Mom would take us to the elevator to see Dad and deliver a cold Pepsi or ice cream bars. Those were busy years, with Dad and Grandpa adding new additions to our house, doing a lot of the work themselves or with help from family. Dad took us on family vacations including road trips to Canada and Montana, and a camping trip to McCall. Weekends included camping, fishing, and taking "Sunday drives." Sunday drives usually included stopping at a cousin's house to say hello and catch up as relatives were very important to Dad. He helped us with our 4-H and FFA projects, watched school sports, drama and music programs, Jr. Miss events, county fashion reviews, and all sorts of activities. Dad and Mom had a rule: you start it, you finish it. They supported us in everything.

Dad returned full-time to the family farm to finish his career. He was passionate about farming, and John Deere green. Wheat, barley, and green peas were the mainstays. Dad farmed with Grandpa Norbert for years before Chris joined them. Farmers don't really retire, but it was a smooth transition between generations. The farm was awarded Century Farm Status in 2002. Harvest was different than any other time of the year. Kim fondly remembers Dad bragging about her at dinner the first time she drove truck and "loaded on the go." She not so fondly remembers getting yelled at when she couldn't get a truck started. Cammie loved riding the combine with Dad; they were the "best days of the summer." Dad was so proud of Chris, except for the time he accidentally tore the auger off the combine going between the shed and wood shop. Dad hopped across the barnyard like a wet chicken, yelling the whole way. Eventually he calmed down... and so did Chris! When Cammie married Greg, Dad had a new farming buddy to swap stories (and equipment) with.

Dad's faith in God was deeply grounded. As a member of the St. Boniface Parish, Dad took care of the church and cemetery for years. He served in leadership roles in the Knights of Columbus, Parish Council, Uniontown Cemetery Board, and helped with the annual church bazaar. Dad wanted to make Uniontown the best place to live. He devoted endless hours serving the community: as a city council member, 33-year volunteer firefighter, lifelong member of Uniontown Sausage Feed Committee, and handyman for the Community Building and The Barn. Whatever needed fixing, he'd find a way to make it happen.

The six granddaughters were a delight to Dad! He's attended ballet and dance recitals, track meets, soccer, basketball, volleyball, and softball games. You also saw Dad's face at sheep shows, fairs, FFA events, 4-H events, and Distinguished Young Women programs. Even if you didn't ask, he'd tell you just how great his granddaughters did; he could do a perfect play-by-play with color commentary! He was the best babysitter and loved taking the girls places to show them off. When we went camping, there would be fighting over who got to ride with Grandpa; he always made sure they each had a turn.

Dad and Mom's adventures included trips to Salmon, Hawaii, and Canada, along with cruises to Alaska and a Caribbean cruise for Cammie and Greg's wedding. A trip to Ireland was a special highlight. Dad would do anything for mom; and she for him.

Dad never met a stranger; just a friend he had not met yet. He shared many enjoyable trips with friends, going camping, hunting, and fishing. He gained many friends along the way.

He loved his children and granddaughters. Dad especially loved Mom.