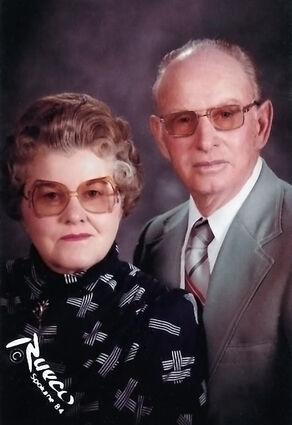 Edna Grace Parrish Countryman passed away on May 25, 2021, at the age of 96, with family members by her side. A longtime resident of St. John, Wash., Edna was born in the family home on March 15, 1925, to Grace Tollett Parrish and Charles Parrish. She was the youngest of Grace and Charles's five children, and lived on the family farm in the Thornton, Wash., area until 1943, when she married and moved to St. John. Edna attended grade school in Sunset, and traveled to and from school either by horseback or, in winter, by bobsled, covered in blankets with her siblings. She graduated from St. John High School in 1943.

When she was 15 years old, she met a very nice young man who worked for her brother. She and Clifford Countryman were married June 16, 1943, in Steptoe, when she was just 18 years old. They moved to a ranch just northwest of St. John, and began their lives together.

With Cliff, Edna crafted a life through farming both cattle and wheat just outside of St. John, Wash. Early in their marriage, when they were just starting out in the cattle business, they decided to raise Angus beef, and for several decades were well known for raising prizewinning registered Angus. Edna and Cliff shared the work of running the ranch, with Edna doing the hard work of milking cows, building fences, and caring for the livestock alongside Cliff. Edna particularly enjoyed going to bull sales, and was once credited by her son, Dale, with being particularly astute when choosing top quality bulls for breeding prize stock. Every year, Edna looked forward to the St. John Stock Show, especially when her grandkids were participating. She was also active in the local Grange, and in 1996, she received the National Grange Golden Sheath Recognition for 50 years of membership and service. In 1978, Edna and Cliff retired from farming after 35 years and moved closer to St. John, at which time their son Dale took over the ranch. Farming remains a Parrish-Countryman family legacy that both Don and Dale continued throughout their lives.

Edna's two sons were a source of love and pride for her, as were her seven grandchildren and 13 great-grandchildren. Edna was a staunch Gonzaga Bulldogs basketball fan. She enjoyed gardening, raised lots of beautiful flowers, and grew many of her own vegetables. Her love of flowers was a theme throughout her house, and the rose garden next to her home in St. John was a source of pride and beauty. She was an excellent cook, with her homemade noodles, sugar cookies, and rolls being some family favorites. She will be remembered fondly for wonderful, warm family gatherings that brought everyone together.

The family would like to thank the staff at Community Pride Senior Living for their care of Edna during the years she lived there.

A private family graveside service will be in the St. John Cemetery on Saturday, June 12th with Pastor Dennis Hinds officiating. Online guest book is at http://www.bruningfuneralhome.com