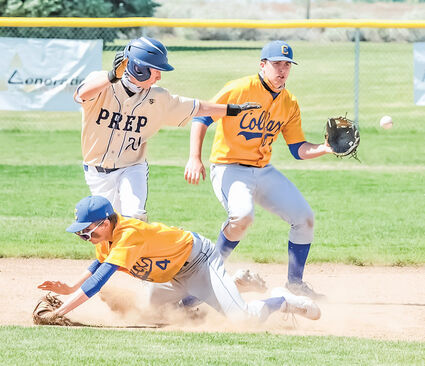 Colfax defenders meet at second base in an attempt to put out the runner.

PASCO - The Colfax Bulldogs baseball team took its first losses of the season, 10-0 and 11-7, from the Tri-Cities Prep Jaguars in Pasco on May 1.

"They're a good team, one of the top two-three teams in 2B baseball," said Colfax Coach Scott Parrish. "They would be in consideration for a state championship."

Opening on the mound for the Jaguars was pitcher David Grewe, who is committed to play at Whitworth University next year in Spokane.

"He threw hard and pretty polished for an 18-year-old kid," Parrish said.

Colfax nonetheless put runners on base, one of which was thrown out at home.