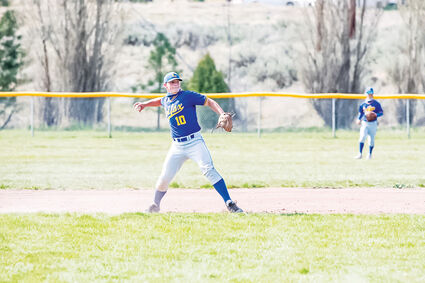 Colfax senior Anthony Becker throws for another out April 23 at Ritzville.

J.D. Peterson and Sam Kopp started on the mound for Colfax and Kit Hockett made his debut for the year as a relief pitcher for both games.

"We hit really well across the board," said Coach Scott Parrish. "Overall, (we) just swung the bat really well start to finish."

A scheduled trip to Liberty was moved to May 8 after the Lancers sports were put on pause due to COVID-19 protocols and the school district returning to online learning.

It gives Colfax a week of practice leading up to showdown at Tri-Cities Prep in Pasco Saturday.

The Jaguars are ranked No. 1 in the state by MaxPreps for all classifications.

"I don't know what it means really, but we've got a pretty tough one this weekend," Parrish said.

For practice, the focus will include fixing hitches in some swings, base running and defensive "fundies."

The doubleheader starts at 11 a.m. on Saturday.

Colfax has totaled 131 runs in eight games, holding their opponents to 32.

The 2021 Bulldogs have one of the larger pitching staffs they have had in some time.

"We've got quite a few kids this year that can get the ball across the plate," Parrish said.

Out in the field at Ritzville last week, the coach looked to send out a different lineup than he has yet this season as he has for each game.

"With our eight seniors, we're trying to get even playing time across the board. I know it's not even," said Parrish. "It's a short season and a lot of it is about having an enjoyable year, and to get guys in a little more consistently than I have in the past."

Garth Meyer is a reporter and sports writer at the Whitman County Gazette.