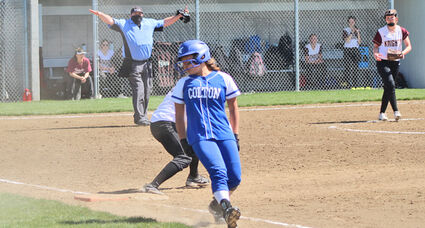 The umpire calls her run safe as Maddie Purnell sweeps past first base. The Colton Wildcats won against Sunnyside Christian at home on April 17.

COLTON — The undefeated Colton Wildcats softball swept Liberty Christian at home April 24 to put their record at 12-0 turning to the home stretch of the abbreviated season.

In the first game tied at 3-3 in the seventh inning, Colton laid a bunt down to advance a runner and win 4-3. They won the second game 8-3.

It was the first time Colton played full-seven inning games this year, all of the others were shortened by the mercy rule.

Looking at the season, overall batting a...