COLFAX – COVID-19 restrictions have claimed another event. The Colfax Chamber of Commerce announced this week it has decided to cancel the Crazy Days festivities.

"I totally thought a lot of these counties would not be in Phase I," said Colfax Unified Executive Director Val Gregory.

The cancelation effects the concert and fun run. Businesses may still have sidewalk sales.

The decision was made after the Mayor's Roundtable meeting last week.

"We're the only town that was having an event," Gregory said, based on information from the meeting.

The biggest concern was drawing a large crow... 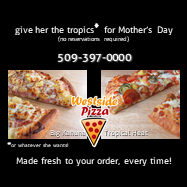